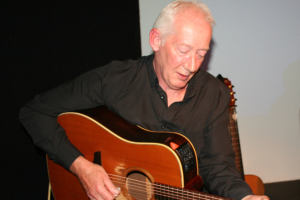 John lives in a small village outside Clonmel called Newcastle. John is a relatively new member of the Booley House, having joined in 2014. John is a self taught guitar player and his initial musical interest was in rock music where he played with local bands Stud and Stonefree.

John later developed an interest in Trad music and is well known for his guitar playing with the group Rattle The Boards where they toured Europe, Canada and America. John also played guitar with Des Dillon and Teac a bloc.

John’s playing is influenced by some of the great Irish guitar players, Arty McGlynn, Donogh Hennessy and John Doyle.