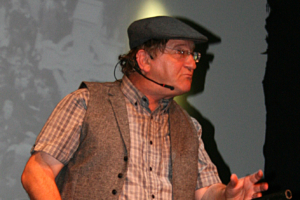 James Lenane is recognised as one of Ireland’s foremost storytellers and is well known in theatre circles as an accomplished award winning actor and director.Storytelling is the art of conversation in Ireland in olden times, when neighbours would sit around the fireside relating stories of events by the spoken word. It’s the medium through which the old Irish stories or recitations were handed down through generations.

James is the holder of an All-Ireland Scór title for recitation – storytelling. He has been the resident Seanachaí with The Booley House traditional show since 1998 and formed part of their successful show tour which played to packed houses in New York in 2004.

Also in 2007 he appeared in the Palace Players production of “Kings of the Kilburn High Road” on the Open Festival Circuit, for which he was awarded the best supporting actor at Holycross and Claremorris drama festivals.

In 2008 he was awarded the best supporting actor at Claregalway and Claremorris drama festivals in a production of a new play “The Band”. James also travels to festivals and variety shows all around Ireland. He has directed the on street pageant for the award winning Féile na nDéise festival in Dungarvan.

James says he looks forward to the The Booley House show each summer as the audiences are wonderful and it gives him an opportunity to use his unique interactive style of storytelling.