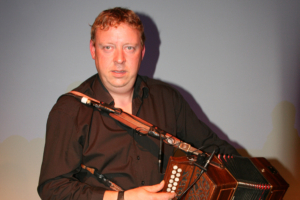 Tony Dunne is the lead accordion player with the Booley House show and is one of the longest running members of the band having been with us since the start. The Booley House Volume 2 is the 5th CD he has been involved in, having produced CD’s with such bands as The Butterfly Band, Natural Brew, and Blackwater.

Tony is well-known for his part in contemporary Irish band The Butterfly Band, who have performed at such international festivals as Celtic Roots in Norway.

He has toured the world extensively performing at various festivals, playing for foreign dignitaries abroad, and doing the concert circuit with these and other bands. He has supported bands such as Sharon Shannon, Danú, and North Cregg, and has in the past been supported by Aslan. His experience of performing in traditional shows is vast having also previously played for shows such as “Dance on the Moon” in Killarney, and “Ceolta Sí” in Youghal. Tony is a natural stage personality loved by the audience and has often been referred to as the ideal musician for dancers.

Currently, we are delighted to have him as a resident accordion tutor for Ballyduff Comhaltas music classes alongside the great Bobby Gardiner, his own former teacher.

He lists his influences as the great box players Mairtín O’Connor, Michael McCauley, and the music traditions of Cajun, Reggae, and French Celtic.