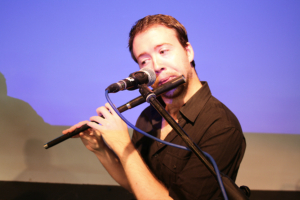 Caoimhín Ó Fearghail comes from An Rinn in the west Waterford Gaeltacht. He started to learn the tin-whistle at the age of eight, taking lessons from Bobby Gardiner. He quickly progressed to the uilleann pipes, under the tutelage of David Power, who has been a big influence on him. Others influences include Séamus Ennis, Willie Clancy, Tommy Reck and Patsy Touhey.

He is also self-taught on flute and guitar, inspired by such diverse flute players as Matt Molloy, Mike Rafferty and Tom Doorley, and also influenced by the many great musicians and singers from his home area.

He has featured on a number of albums in the last few years playing various instruments, including Lá ag Ól Uisce, with his brother Seán and Tomás Ó Gealbháin.

He has performed frequently at home and abroad, solo and also with groups like Danú and Caladh Nua.

He was the 2012 recipient of the TG4 Young Musician of the Year award (Gradam Ceoil TG4).

Tickets are now available for our upcoming performances. Please check out the contact page for more details. Starting the 17th of July every Wednesday night, starting at 8.15 pm until the 28th of August.